Zero Waste Austria Hub Club Meeting on Food Waste- the reasons for it and how to prevent it.

Wednesday, September 16​th​, 2015. More than 30 people gathered at the Impact Hub Vienna for the second meet­up of Zero Waste Austria (ZWA). This is the new name replacing the previous Zero Waste Society. After a short introduction by Helene Pattermann founder of Zero Waste Austria a concise questionnaire was handed out to find out what everybody expects and wishes from ZWA.

Next up there were four talks:

Franck Wallet​ speaking about reasons for food waste and explaining his personal journey and what he found out about the system behind food waste: The mass market system between producers, food industry, retailers and consumers being terribly inefficient and the primary reason for enormous amounts of food being wasted 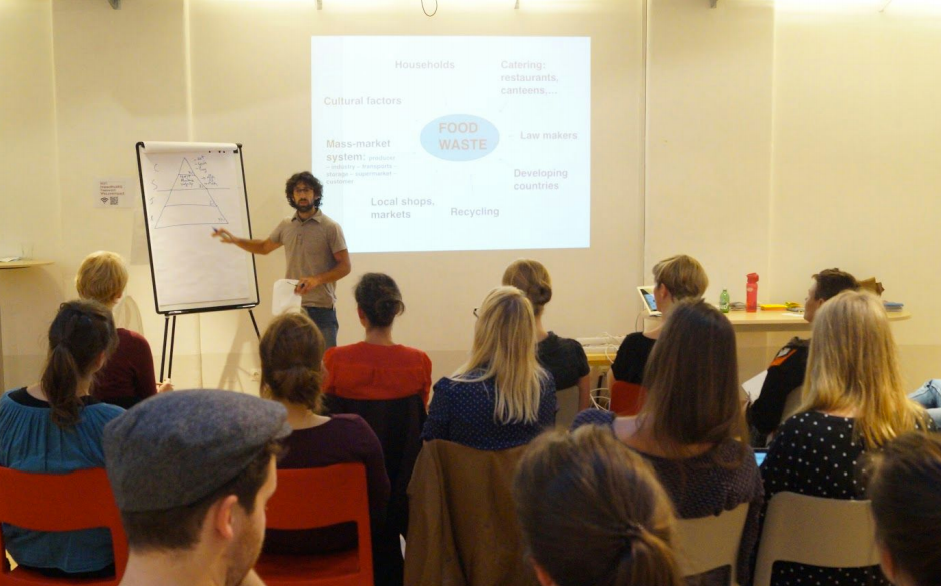 We learned that farmers grow far more produce than will ever end up on supermarket shelves. Particularly sensitive are fruit and vegetables of which only the “prettiest” qualify for the beauty contest on the shop shelves.

Franck ends with some practical tips how consumers can make a change: Buy only what you need, pick out and buy fruit which has a more natural look and demand new offers from your food retailers – who pass it on to industry who pass it on to the farmers. Frank strongly recommends this book: Stuart, Tristram (2009). Waste: Uncovering the Global Food Scandal. Penguin. ISBN 978­0­14­103634­2. You may also want to watch Mr. Stuart’s TED talk on Youtube.

​The next speaker was Marlies Hrad​ from the University of Natural Resources and Life Sciences (BOKU) giving an overview on food waste studies at the Institute of Waste Management (ABF­BOKU). 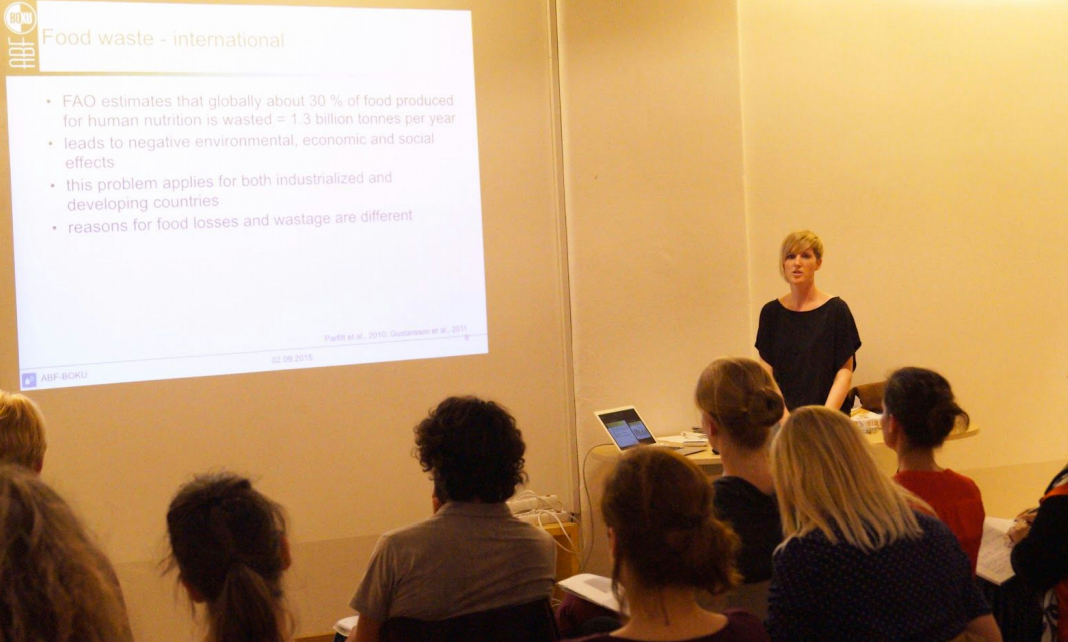 Here are a few numbers to remember: The Food and Agriculture Organization of the United Nations (FAO) estimates that worldwide around 30 percent ​of food produced for human nutrition is​ wasted​.

In a study from 2011 the FAO looked at food waste in different parts of the world. The largest food wasters are Europeans and US­Americans with 95 to 115 kilos of food waste per head per year at consumer level only, but also developing countries.
In developing countries less food is wasted in kitchens (food waste is estimated with 6 to 11 kilos per capita per year) but substantial amounts of food is wasted from production to retail.
If you look at food loss over the whole supply chain the magnitude of the problem is overwhelming. According to the FAO in Europe in total around 280 kilos of food are wasted per capita per year.

The European Commission set a target of reducing food waste by 50 per cent by 2025 – which was is now seen as too ambitious. There is a revised target being set for a reduction of 30 per cent​by 2025. Furthermore we can also expect a guideline for a European food waste policy by 2016.

We learn that there is little reliable data accessible about food waste as industry data is often not accessible. As a consequence there is no comprehensive Austrian study on the subject but many studies on specific products and segments of the supply chain.

Christine Ehrenhuber ​presented one of these key studies,​ from Tatwort United Against Waste: Reduction of food waste within the food service industry in Austria. 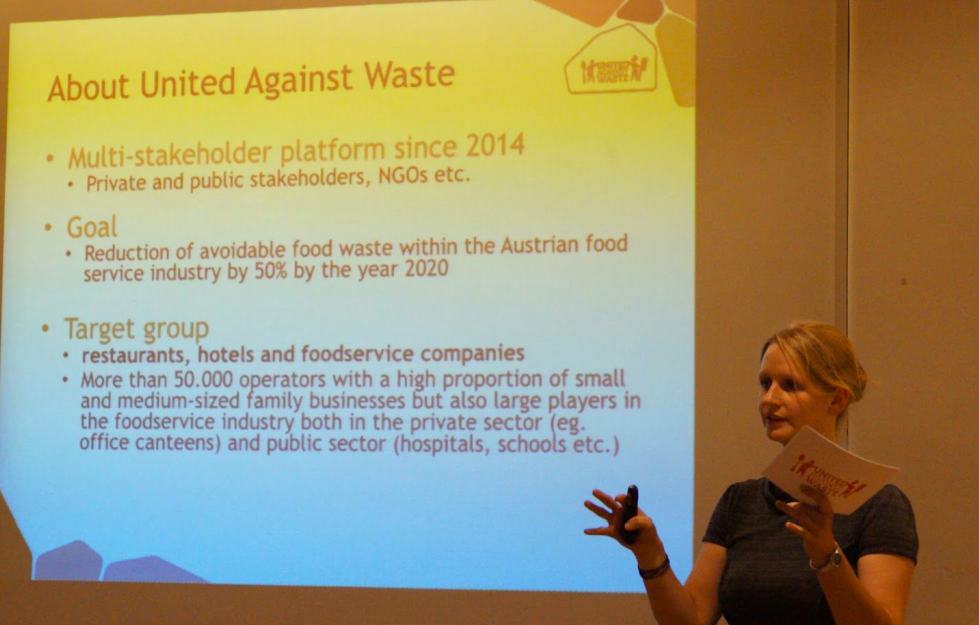 The findings: There is a wide gap between efficient and inefficient food service.
Food waste ranges from only 3 to 46 per cent of the food served.

An interesting point came up during Q&A: Amongst the best performers are restaurants, amongst the worst the food service companies despite sophisticated planning and controlling.

The conclusions for Austria: In the food and hotel industry up to 51.000 tons of food waste each could be reduced per year as well as 79.000 t in food service companies (hospitals, canteens).

The total food waste in this sector amounts to € 380 million per year.

Tatwort organizes events to spread facts and present best practice examples. The speakers are cooks who enjoy credibility in the industry; there is also a poster for kitchens about how to avoid food waste and a magazine with lots of practical information.

The last speaker is Marco Arcangeli ​from Foodoor.

Foodoor is an app enabling food sharing with your neighbours. Foodoor is currently looking for beta testers!

The second part of the meetups was all about the future of Zero Waste Austria.

Helene suggested meetups four times per year, the next Meetup will be either in December 2015 or January 2016 and will focus on Zero Packaging.

The future of ZWA will be a community of fans, members, partners (companies with an interest in zero waste) and the wider digital community. There will be a website as an information platform with tips, stores, projects and a blog.

Helene presented the work in progress for the logo of Zero Waste Austria with the audience giving feedback on colors and designs. On the back of the questionnaire everybody was asked to write a tagline for the new logo. There will be a members meeting announced soon.

The official part of the meeting ended with ideas for the next couple of months for projects ad actions such as Discosoup, food for refugees, the national left over day on May 12th 2016. Details will follow. The evening finished off with everybody networking around the foodsharing buffet. 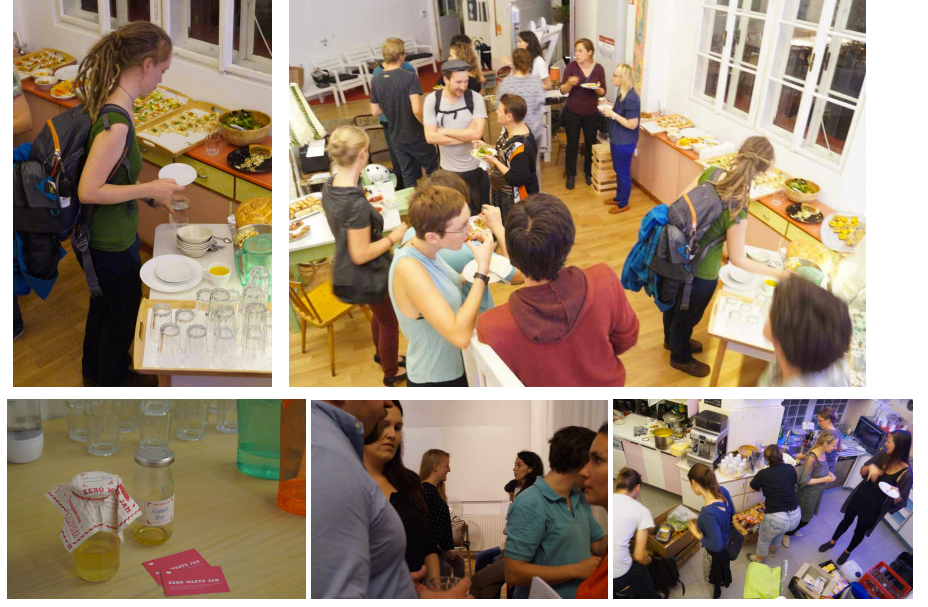 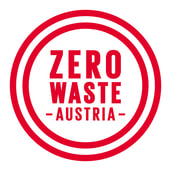